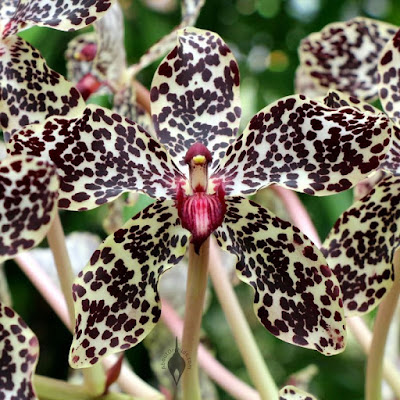 EVER WONDERED HOW THE FIRST ORCHID GOT THERE...JUST SAYING
When the salt torched her skin, she shrieked like ten thousand banshees bumping into age-old trees in the jungle. They has banished her to the heart of the jungle, calling her a witch. Only because the King (i don't remember his name now) loved her so much. She was the most beautiful woman in her tribe. (i dont rightly remember the name of her tribe now either)

She knew then for sure, they didn't want her around anymore. Her pride was hurt, and her heart was beating lapses of lemons. Not even Anancy in all his trickery mastery, could revenge her, she thought. So she withered, right there in the jungle.

When next they passed by, every one stopped to look at her, she was so beautiful. Her mouth still open from her dead lips screaming. Her petals speckled from their wicked salting.
But how did she get here? They mused with their mighty minds and called her epiphyte.
MAKING MYTHS[3] EVER WONDERED HOW THE FIRST ORCHID GOT THERE...JUST SAYING © gillena cox 2017


epiphyte - A plant, such as a tropical orchid or a staghorn fern, that grows on another plant upon which it depends for mechanical support but not for nutrients. Also called aerophyte, air plant.


Today Magaly gave us a list of really really funny titles, and asked us to be inspired to write a poem or story after choosing one from her given list. I chose: #12. People Who Don’t Know They’re Dead: How They Attach Themselves
to Unsuspecting Bystanders and What to Do About It, by Gary Leon Hill