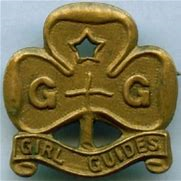 FIRST WOMAN-BLOOD
Knots and medals, songs and pledges to survival, all these tie in to Menarche Days. Here we are on Camp. "April Jubilee Friendship Camp Trinidad at Golden Groove, 1964" hosts Girl Guides from various countries and walks of life. We eat our slices of cantaloupes at breakfast. For me, it is the first time i am tasting this fruit. Bright, beautiful as morning sun rising, sweet and delicious.
However; later in the evening, embarrassment hones its way in, in a wet sticky way. I feel a bit left out of the bigger picture; and i silently, [in my mind] wag a finger of disapproval at my mother, because the other girls tell me, it was their mother, not their father, who had explained to them about The Menstrual Cycle.

April One / One Love
Prompted by Marian and challenged to Let's write poems about being first, or on the subject of one--the power of one, one love, first in line, one is the loneliest number, we're number one--you got it. Go!