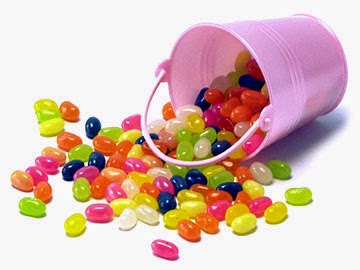 ... most historians contend that jellybeans were first linked with celebrations of Easter in the United States sometime in the 1930s for its egg-like shape. In politics, jelly beans earned fame as Ronald Reagan claimed them as his favorite treat.


HAPPINESS
And, as night stood, cobalt blue,
They now cower'd around a cold moon,
All strident clouds of daytime sun shivering;
Lived by the light, slept in the night;
Happily then, one bright star, sang a lullaby;
Ever these words so sweetly heard,
After, they had supped, on jellybeans
© gillena cox 2015

Linking to THE TUESDAY PLATFORM