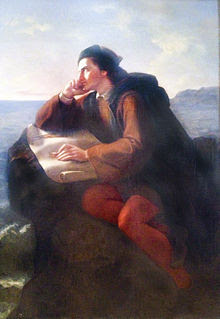 WHEN THREE SHIPS SAILED
In ships three
Santa Maria, Pinta and Niña
They set out to sea

This was his voyage three
Lo! ahoy! he saw the peaks three
And named the landmass La Trinity

Christopher, Bartolomé, and Diego
Returns to Spain from voyage three
Reward to chains of imprisonment


Written For Hedgewitch's prompt
Poetry To The Third Power

The Challenge:The idea of three can appear in any form and in any association in your poem: three objects, as in the floating heads shown in the painting by Odilon Redon below, three places, events, people, states of mind, directions, colors, or whatever, as long as you incorporate the number as a meaningful element of your piece.