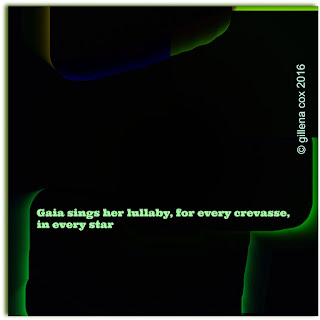 MAKING MYTHS [2] TREMOR
Gaia sings her lullaby, for every crevasse, in every star. There's a lull, by which her progeny earth, will rest, will dream, will seep into the tunnel of darkness, emerging out, at the the sparked end, having traversed through the caves and caverns beneath, like a veiled bride, unknowing, until, the sunlight, kisses her cheek; one, then the other, and blushing, with passion awakened, the warmth of sun, like a splendid God, challenges her being to, the sensation of rhythm, so she sways and swoons, swaggers, and moves her hips to a new found prize called the dance. First her hips, then her feet, jewelled and coloured. Slowly, her pets tom-toms, too, are awaken, in a perilous spate of surprise to the view of their mistress's concert entranced, sounding a pace to her hips, those hips, mesmerizing, the bridegroom, Sun. Their passion rising, her feet, moves faster, shifting layers, shifting levels, till all that's left are the shambles, the sirens, the sobs. Muffled sounds; for now Mayhem and Despair too, are awakening. Chaos yawns. it's still to early.
dead men's bones -
the rattling of windows
in earth tremors
MAKING MYTHS [2] TREMOR © gillena cox 2016