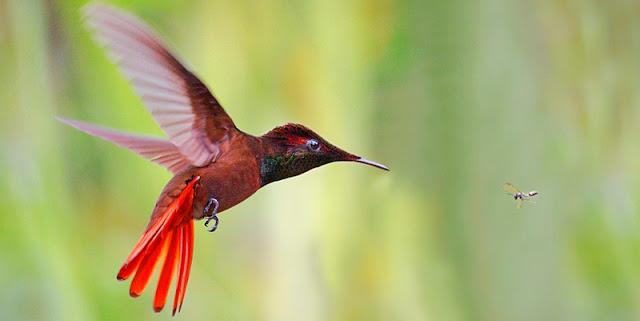 TRINIDAD - LAND OF THE HUMMINGBIRD [MAKING MYTHS 6]
She was pretty, she was cute.
She had big dreams;
But she was small, too small
In the eyes of her tribe.

Now's when, Jealousy, the bird of woe,
Flies into this poem.
She, and many of her jealous kind,
could only fly forward.

One night, Jealousy stole some stars.
She and her cohorts bounded Yerette,
Placing in her beak, starlight.
Then, they went to Greatest Honourable Bird.

Look! see! Yerette has eaten some of the stars.
Of course Yerette was banished from Cloud Patch.
She flew and flew till her wings were weary.
Then she, exhausted, flew backwards.

Bumping into a rock,
The starlight expelled from her bound beak.
And there it was: three, now starlit, Mountains.
She pledged herself to this uninhabited place,
Making it her own.

She called it Iere.
She plucked feathers from her beautiful wings
And birded this place called Iere
Soon there were charm after charm of hummers.

She blew on her magic flute
And people had dreams; dreams of adventure,
Dreams of conquest in far away lands,
And so they came and peopled her land. 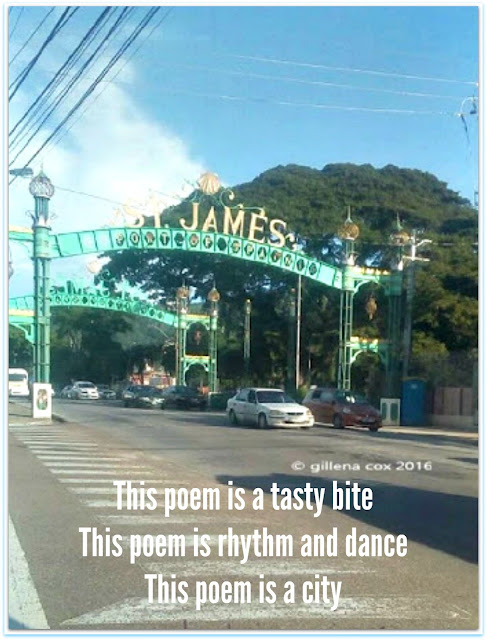 Early in the morning - throngs,
Long standing queues,
A nod to the question: hot or slight
Settles the amount of pepper to Doubles.
This poem is a tasty bite.

Children's carnival - Main Road alive,
Intricate patterns costume their way,
'we beat' festival - pan in the streets,
And beautiful tadjahs at Hosay.
This poem is rhythm and dance.

Such is the vibe of Western Main Road
Loath to sleep, until wee hours,
When the bars close their keep
Tasty feisty insomniac, is St James.
This poem is a city.


Blog hopping today with imaginary garden. In April we write a poem every day

April 20: Say the Names of the Places You Love
Sherry Blue Sky prompted: challenge is to write a poem in the spirit of “Say the Names”
Day 21: Mythical Creatures
Brendan prompted:For today’s NaPoWriMo challenge, pick an animal and write its myth.